In the past week, over the course of Wednesday and Thursday the negative measures on the U.S. equity markets were extremely unnerving. The broad-based S&P 500 declined over 5%.

There is a curious symmetry in this price action as the previous time this scale of retreat was booked was in June 2016 when the UK decided to leave the European Union (EU).

From the Dollar perspective it is clear that the “Buck” is on the backfoot as the market is trying to work out what is happening in the U.S.

The Federal Reserve has noted the apparent underlying strength with unemployment booked at 3.7% in September, down from 3.9% in each of the previous two months and below market expectations of 3.8%. It is the lowest jobless rate since December of 1969.

U.S. Average Hourly Earnings for all employees on private non-farm payrolls rose by 8 cents or 0.3% month-over-month to $27.24 in September. It follows a downwardly revised 0.3% rise in the previous month, matching market expectations. Over the year, the figure has gained 73 cents, or 2.8%, easing from a 2.9% jump in August which was the highest annual gain since June of 2009.

This should be good for the Dollar as the Fed has raised interest rates by 75bps so far this year and is expected to tighten again in December. Looking ahead to 2019 the market is discounting three rounds of tightening.

The trouble for Dollar devotees is that no one really has a firm grip on where a neutral fed Funds would be set. Do we take a cue from Fed Chair Powell said we are a “…long way from neutral…” that could imply 3.25% is needed. Or do we take heed of the U.S. President who feels the Fed are over eager to raise rates and so stifle his economic recovery and his mid-term prospects.

The equity market showed its angst this week as higher rates will fetter the housing market and as the cost of capital is increased so fewer projects will offer an acceptable rate of return. In short, the economic expansion could stutter.  That will not be good for the Dollar.

Still, Sterling cannot feel to jolly right now as Brexit negotiators are meeting now to try and resolve several major issues ahead of a crunch summit of EU leaders this week.

The talks between the UK’s Dominic Raab and the EU’s Michel Barnier are focusing on Northern Ireland and future economic relations. These discussions come at a time when the Prime Minister is under plenty of domestic political pressure, particularly over the issue of the Irish border.

If the UK brings back a deal that the Democratic Ulster Unionists do not like, they have threatened to vote down November’s budget. The rebels on the right-wing will not accept any open-ended “temporary” sojourn in the Customs Union. It could be a real risk that a General Election is forced during this year or early next with the prospect of the hard-left Labour of Jeremy Corbyn marching into power.  That will not be good for Sterling. 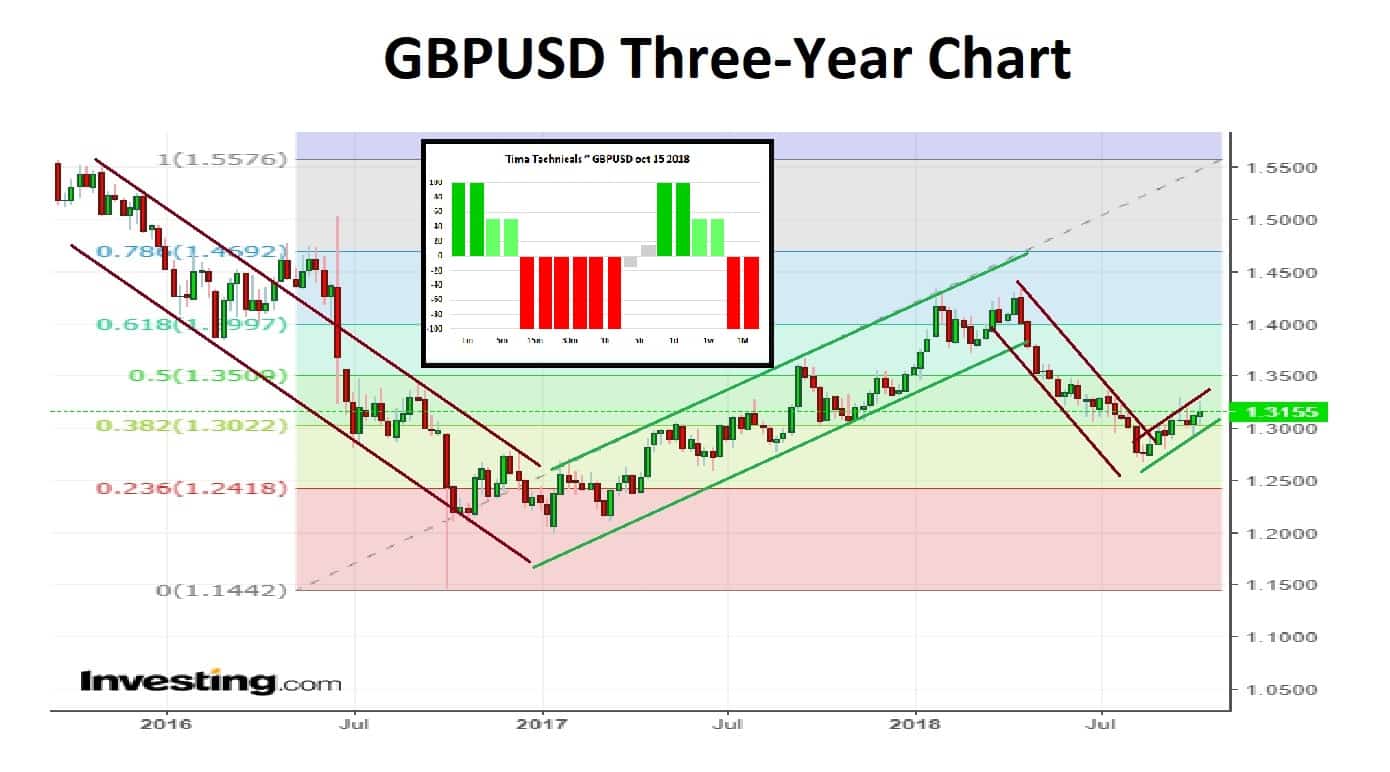 The chart above reveals that the level of Sterling against the Dollar recovered a little last week, and that the early Monday trade may see the GBPUSD rate book further early gains from the Friday close of 1.3155. Sadly, the small recovery does appear to be all but exhausted and a push over 1.3161 would not look long lived.