The majority of the most successful marketing campaigns have employed the science of “Psychology” in appealing to consumers. It is used in an intelligent and honest way that is both ethical and legal so as to attract, entice and engage consumers. In short, it compels them to buy.

Similarly, a savvy investor, particularly in equities should not be motivated purely by what appeals to themselves, although, having an opinion is, of course, important. Additionally, what may be worth even more is being able to recognise what other investors will find attractive in an individual equity, sector or an index.

John Maynard Keynes is best known for his work as a leading macroeconomist with his revolutionary analysis of stimulating a flagging economy.  However, he was also a successful investor. So much so that his success in the markets led to offers, which he accepted to act as a fund manager on behalf of King’s College, Cambridge and the National Mutual and the Provincial Insurance companies.

He held onto one great and lasting observation in that investors do not actually make money by picking the best companies, but by picking stocks that waves of other traders will want to buy.
He knew that investing is fairly described as an exercise in mass psychology the typical profile of which is illustrated below. 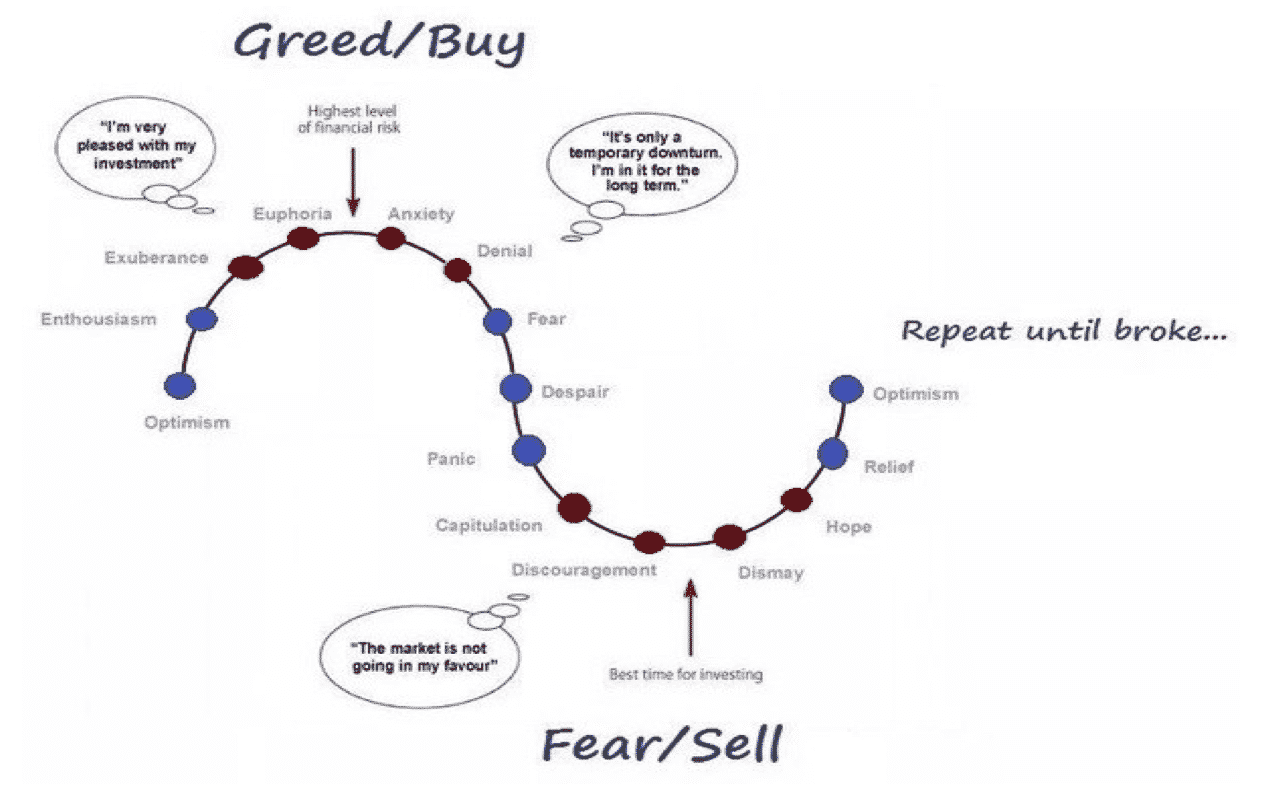 It is, of course, impossible to predict the future with complete accuracy and with market investments one is not seeking total accuracy. So long as one has more wins in monetary terms than losses one will come out ahead. This can be aided by having the discipline to deploy a sensible stop loss. It will save many tears and sleepless nights during the journey.

One can look at charts but it is also important to consider the flow of dialogue that is permeating the market or even wider population when forming an opinion as to whether one should be buying or selling. Many wise old sages of business and markets are warning that a top is close at hand in the US equity markets given the high valuations and that financial assets have been propelled higher as cheap money via quantitative easing has enhanced the attraction of repatriating equity and debt.
However, despite such dark warnings, tantrums from North Korea or even the impacts of Hurricanes Harvey and Irma it seems that investors are ignoring the warnings of a severe decline in the stock market as the keep pouring funds into equities and so continue to bid up the stock market. 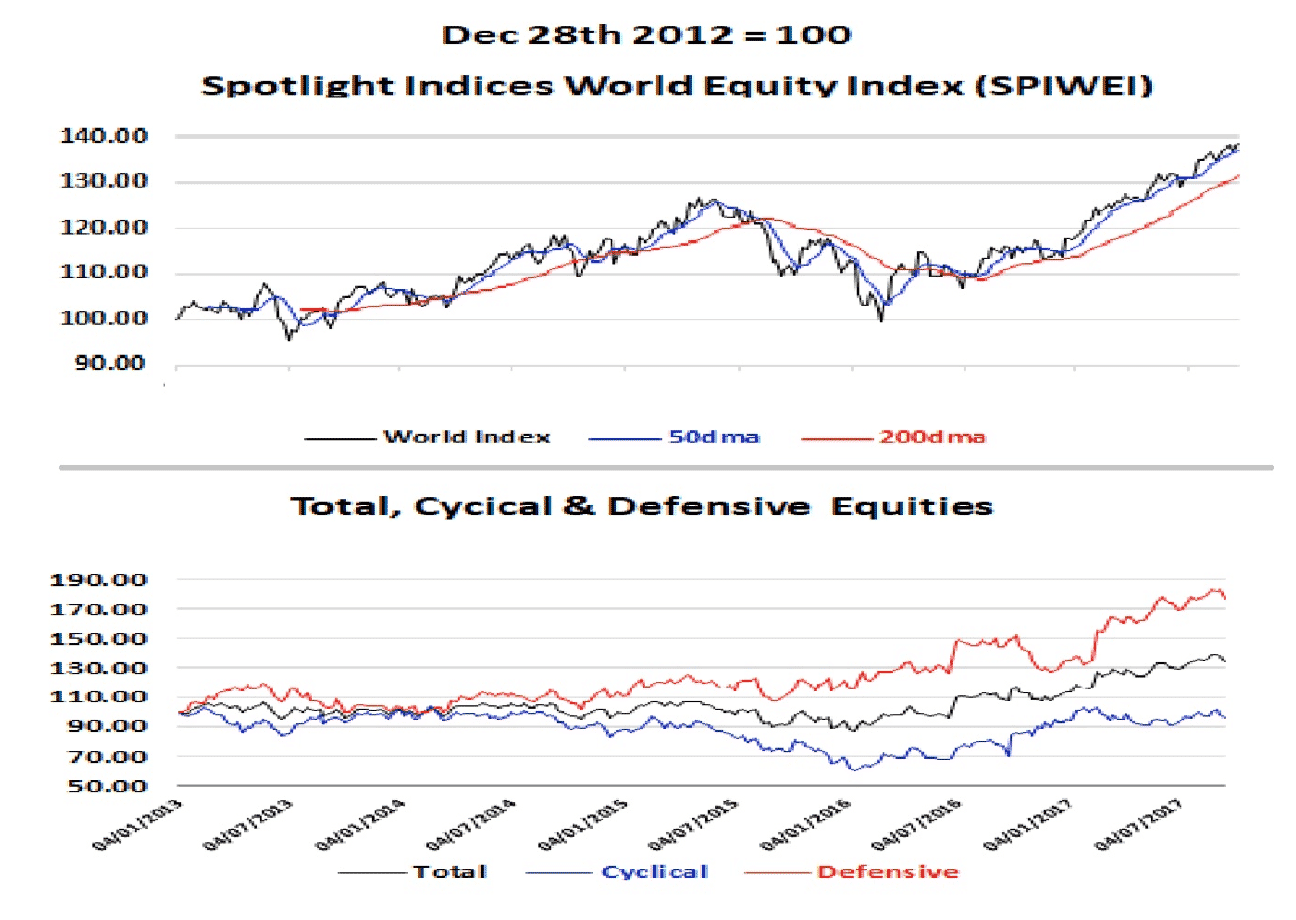 The chart above shows that when global equities turned down between May 2015 and February 2016 the decline was led by the cyclical stock sector, -17.24%. In contrast, defensives only fell by 5.38%.

Therefore, if the calls that equities are near a top start to resonate, rather than a full-on exodus from the market, psychology would suggest that a major rotation will be seen into the defensive sectors, such as consumer staples, food and beverage, health care, tobacco and utilities. Such is the apparent mood of the market that current declines are perceived as mere dips, i.e. new buying opportunities which would favour cyclical stocks.

The echo of the past

Surely there is a more analytical approach to evaluating the degree of over-extension that exists in the market at the moment.

Thus, one can see why the current level is causing some concern, after-all in 1929 real inflation corrected equity prices in the US lost 80% of their value by 1932. This was, of course, the largest crash in the market’s history, however, back then there was not the same level of sophisticated circuit breakers that are in place today.

Still, it is hard to argue that the current level of valuations do not make the market vulnerable to a change in psychology. In 1929 there was a stampede of negative emotion as the drive to higher levels in 1929 had been fuelled by individual investors buying into the dream of “fantastic illusions” as they became consumed by widespread speculative gambling with borrowed funds.  There was no genuine sign of measured or thoughtful investing.

Move ahead to the turn of the twenty-first century to encounter the dot-com crash that started in March 2000 and we saw eerily similar themes in news articles. In early 2000 a surge of investments was made into anything with “.com” in the company name. As the market turned the press of the day cruelly refereed to dot-com investments as “dot-bombs,”

These were the days when people finally understood what Alan Greenspan had meant in 1996 when he spoke of “irrational exuberance”. It just took four years before investors rethought their assumptions about the wisdom of holding shares in internet companies.

So here we are in 2017 and are we guilty of being too smug in thinking that mass psychology is in a different place. The way we seem to shrug off missile launches from North Korea or a breakdown of bi-partisan politics it is as if investors do not seem to have the same fears as in 1929 or 2000. The do not seriously believe that other investors could suddenly and rapidly sell and exit the stock market.

There has been talk of too much investment being directed at the giants of the new economy e.g.  Amazon but questions get asked about where Apple’s next big earner will emerge from. Certainly the USD 999 price point for the iPhone X left many unimpressed.

In a way, equities have slipped under the mass psychology radar …for now… as the recent headlines about an investment being overdone is found in the case of Bitcoin. Not many really understand the crypto-currency space and in the past week Jamie Dimon, Chairman and CEO of JP Morgan Chase has once again denounced it as a fraud.

The unit has fallen by 24.25% since its high close on September 1st and yet it has had some recent days of extreme moves; -15.89% on September 14th and then up by 14.20% on the 15th. This is certainly an area where mass psychology is more likely to be seen in force as it is lashed by the extreme swings in sentiment and volatility. Certainly, Bitcoin has in recent weeks been something of a heatshield for equities.

We have seen that valuations are high, but as of the middle of September 2017 with bond yields so skinny and only a few investors willing to embrace the dark arts of derivatives equities still appear to be best game in town for diversification and returns. Certainly, the psychological dimension of the equity market does not currently look too much like a time-lagged cousin of 1929 or 2000, let alone its evil twin.

Stephen Pope is the Managing Partner of Spotlight Group. He has worked in the world of finance since 1982 and has performed d... Continued