Be in no doubt, the world’s financial markets are in a funk as bond yields race to a bottom that clearly does not stop at zero. Equities edge lower with every aggressive outburst on Twitter from the occupant of the White House. Commodities seem destined to lethargically limp lower and economic data is far from spectacular as the threat of a trade /currency war looms large.

The tension can be seen in Figure 1 which illustrates the recent intense spikes of volatility in the CBOE Volatility Index and S&P 500 VIX Futures. The days where the scale of the session move is equal to or exceeds +/- 2 standard deviations (+/- 2σ), are marked by the red lines. The intensity of the volatility clearly rose as August came to an end. September may be quiet, but October has a history of being volatile. 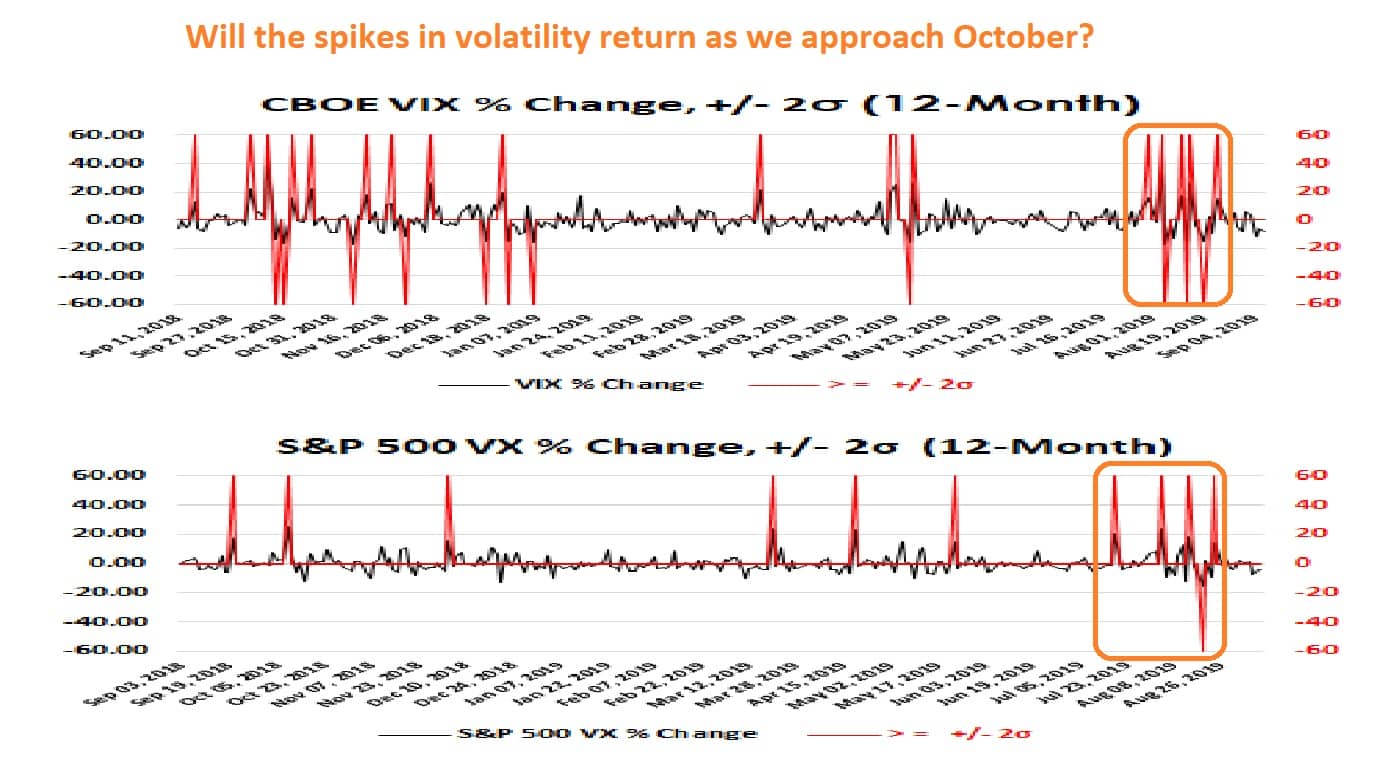 Given the modern world economy in terms of trade in goods, services and securities is driven by monetary flows, it would make perfect sense to listen in to the conversations that the world’s leading central bankers are holding. This not just a message for the moment, the musing of the major money masters has ramifications that will echo for months to come.

The first recent signal that was worth listening to was found by tuning into the 2019 Economic Symposium hosted by the Kansas City Federal Reserve at Jackson Hole, Wyoming. This gathering was the first-time market agents heard the thoughts of the Federal Reserve Chairman (Fed), Jerome Powell since the July FOMC meeting. On that occasion he delivered the first interest rate cut since the financial crisis.

However, what was immediately unsettling was the fact that the Fed Vice Chair Richard Clarida said on August 23 that the global economy has deteriorated since July.

Dr. Clarida did try to soothe the markets by stating the U.S. economy is “…in a good place…” adding he doesn’t see a heightened recession risk. He argues that one must take the economic data in the round and for Clarida the signals are saying that the U.S. economy will be at or above trend growth if the appropriate policy is implemented.

Maybe the Fed had better act without delay as Nonfarm Payrolls in the U.S. increased by 130,000 last month following a downwardly revised 159,000 in July. One should note that the August figure was below market expectations of 158,000.  Another measure of concern is the ISM Manufacturing PMI in the U.S. which fell to 49.1 in August from 51.2 in the previous month, missing market expectations of 51.1. Remember, when below 50, it implies the level of industrial activity is contracting. The latest reading pointed to the first month of retreat in the manufacturing sector since January 2016 as new orders and employment declined amid concern about U.S. – China trade dispute.

The need for action is mounting and many market agents are not passive, long only investors. They must be active to make their capital work as efficiently as possible. Therefore, they need to live in the here and now; not six-months down the track which is the usual lag between Fed action and economic impact.

American equity markets held their gains on Friday; however, they were unable to join a rally that had been ignited by the People’s Bank of China (PBOC) signalling an easing of credit conditions. It announced Friday that it was reducing the amount of funds that banks must hold in reserve in an effort to further stimulate its economy.

The PBOC said its reserve requirement ratio would be cut by 50 bps and it would further reduce that ratio by 100 bps for some qualified banks, effective from September 16.

One constant that drives the market is the ongoing tension between the U.S. and China over trade. It is a genuine concern as the other key economic region, the Eurozone is struggling. GDP growth advanced 1.2% year-on-year in Q2 2019, slowing from an upwardly revised 1.3% expansion in the previous period. At the heart of the region is a moribund Germany. The region’s largest economy expanded a seasonally – adjusted 0.4% year-on-year in Q2 2019, slowing from a 0.9% growth in the previous three-month period. On an unadjusted basis, the economy stagnated, after a 0.8% advance in Q1. This has serious implications for the Eurozone as on a QoQ basis France grew by 0.3%, Italy had no growth and Spain was only at 0.5%.

Therefore, plenty of attention will be directed at the European Central Bank (ECB) next week when the President, Mario Draghi is expected to unleash a wave of monetary stimulus. Investors have been steadily buying Eurozone sovereign bonds on the expectation the ECB will revive its asset purchase programme to the tune of €40 Billion a month. This has driven many yields into negative territory. 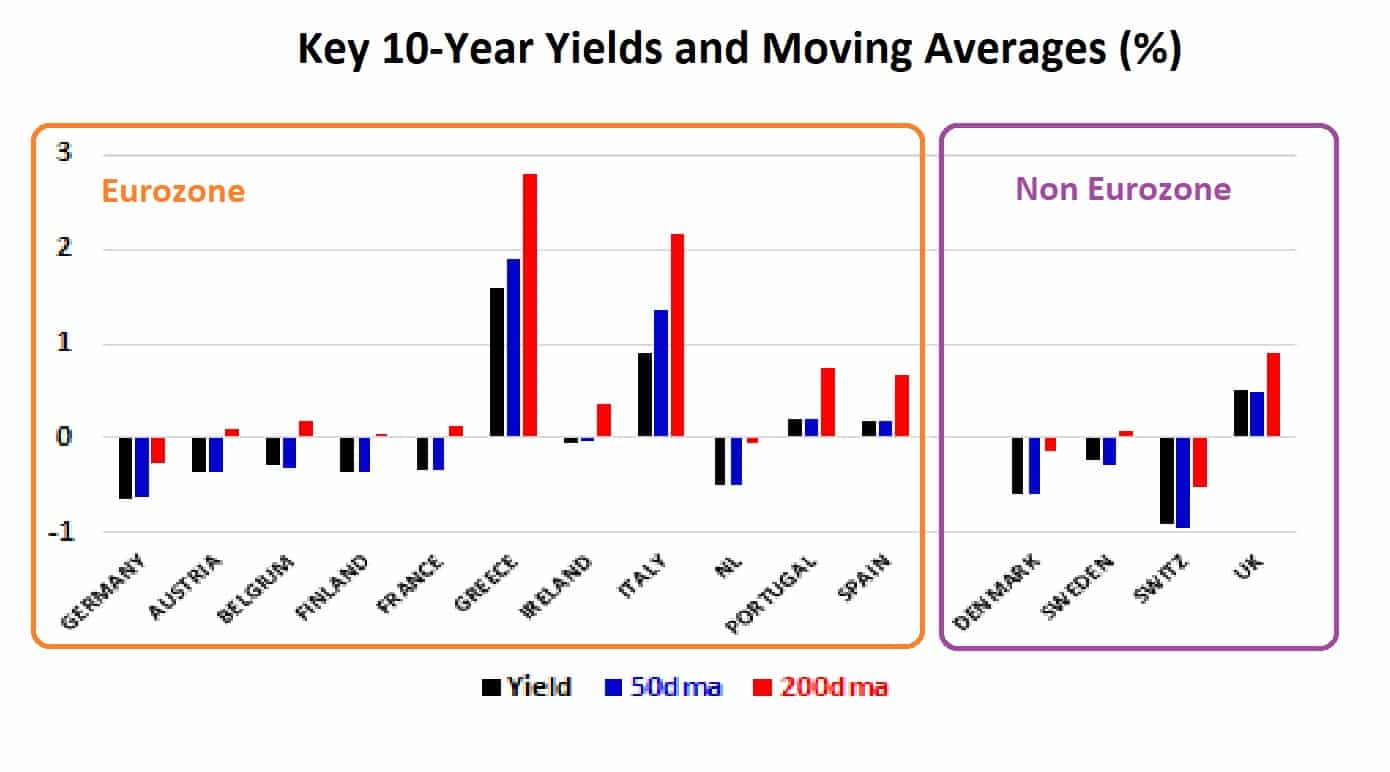 One must think that Draghi will get his way and be able to overrule hawks from Germany and the Netherlands who opposed the previous €2.6 Trillion round of bond purchases. One should also look for another 0.1% to be shaved off the deposit rate at the ECB which would take that to -0.50%.

However, the global economy will be driven by how the U.S. is progressing. Despite the mildly encouraging opinion of Dr. Clarida one metric that could be signalling a gathering storm is the spread between the U.S. Treasury two- and 10-year notes. The current levels are T2 at 1.540% and the T10 at 1.560% i.e. they are just positive by 2 bps, having been negative last week, Figure 2.

The curve is therefore hovering on inversion between these two critical maturity points. It is possible to hear many analysts that will focus on different parts of the yield curve; however, any inversion tells of an expectation that we will see weaker growth in the future.

In March this year, inversion of the yield curve hit 3-month T-bills for the first time in about 12-years when the yield on 10-year notes dropped below those for 3-month securities. This spread reverted back and then inverted again in May and is now trading at -43.8 basis points from -36.0 basis points a week earlier. 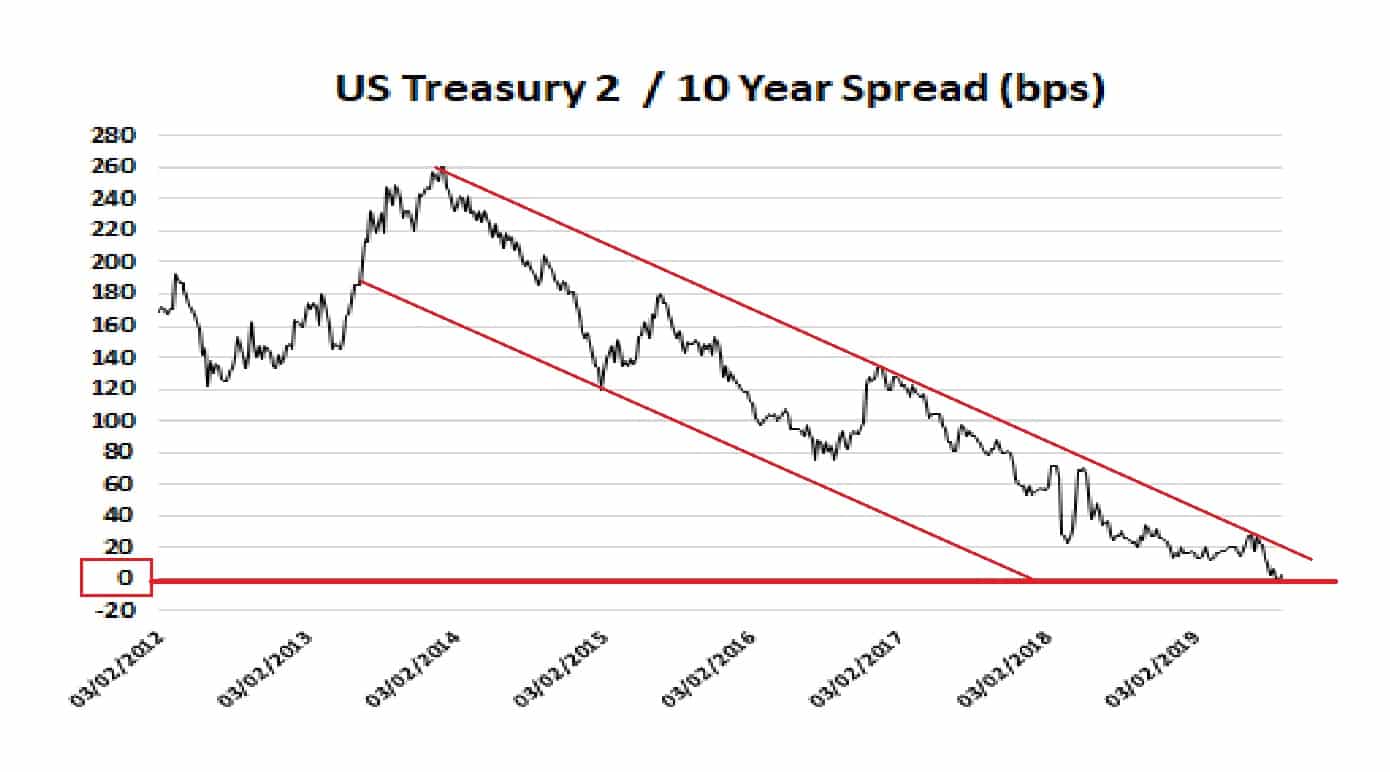 The curve between T2 and T10 has averaged just +2 bps over the past four weeks down from +11.8 bps in the four weeks before that. This is the smallest it has been since 2007. This matters as yield curve inversion, especially in the U.S. is a reliable signal of a looming recession. Indeed, history shows that when the spread is under 100 bps, we should start to be worried.

The U.S. curve has inverted before each recession in the past 50 years. It offered a false signal only once in all that time, although the time-lag has varied. This matters as shorter-dated securities are highly attuned to the interest rate policy set by a central bank such as the Fed. In contrast longer-dated issues are influenced by investor expectations for future inflation.

If rates are rising as the central bank seeks to normalise rates after a prolonged period of accommodation that will push up yields on the shorter-dated paper at the front end of the curve. If future inflation is seen as contained investors are willing to accept relatively modest yields on long-dated bonds.

The curve has been flattening relentlessly since July as concerns increased that weak international growth would spread to the U.S. economy and as the U.S. China trade war fettered on business sentiment.

We have slipped into an environment where investors are becoming increasingly  concerned that a return to accommodative central bank policies from the key players such as the Fed, European Central Bank, People’s Bank of China, Bank of Japan and Bank of England will not be enough to stimulate international growth.

Stephen Pope is the Managing Partner of Spotlight Group. He has worked in the world of finance since 1982 and has performed d... Continued