The economic calendar is heavily laden with potentially market-moving data points and events during the coming week.

Certainly, a key theme will be the next steps in monetary policy with the Federal Reserve, Bank of England and Bank of Japan all making interest announcements. The only central bank that is likely to be moving on rates this week is the Bank of England.

However, I sense that it will not be a piece of economic data or a monetary policy decision that will overshadow the market. My own view is that more volatility in the leading currency pair, EURUSD, will be driven by the ongoing fallout from Catalonia’s decision to declare independence from the Kingdom of Spain.

Look at the reaction of EURUSD in the one month-chart featured below.

This chart, which has deliberately been left unobscured by technical analysis lines shows that the level of 1.1724 had acted as a reasonable support line since the start of October. The level of EURUSD was looking ready to rotate lower from the third declining top on the 26th, however, this time there was no gradual decline, rather a rapid retreat of 1.38% on the day.

The first trigger for the fall was activated by the ECB as Draghi cut the value of ECB bond purchases from €60 Billion to €30 Billion a month, starting from January and ending in September next year.

Now, one may have thought that a step toward tightening monetary accommodation would support the Euro, however, that same day the Euro slid against the U.S. Dollar on the announcement of healthy data out of the US.

Also, it was clear that something was afoot and about the be declared in Barcelona on the next day.

As had been anticipated, Catalonia’s regional parliament declared independence from the Spanish Kingdom on Friday when the independence motion was passed in the 135-strong assembly with 70 votes in favour, 10 against and 2 blank ballots, the assembly’s speaker said.

Lawmakers from three mainstream national parties, the People’s Party (PP) of Spanish Prime Minister Mariano Rajoy, the Socialist Party, and the centrist Ciudadanos party left the chamber before the vote to register a protest. The declaration led to the central government in Madrid deciding to activate the formalities of imposing direct rule on Catalonia after the Senate voted to impose central control over the Catalan police force and tax collectors.

This is not an issue to be dismissed as a little local difficulty for within the European Union (EU) several regions are agitating for more autonomy or even independence.

Of course, the UK has seen Scotland seek independence and whilst the vote to leave the EU is undoubtedly the biggest split we’re likely to witness in Europe in the near-term, there are movements across Europe that could end up physically separating entire nations.

In Spain, in addition to Catalonia with 16.03% of the population, the Basque Region (4.67%) and Galicia (5.80%)are demanding increased autonomy. However, the Spanish situation may just be the tip of the independence iceberg, consider the map below. 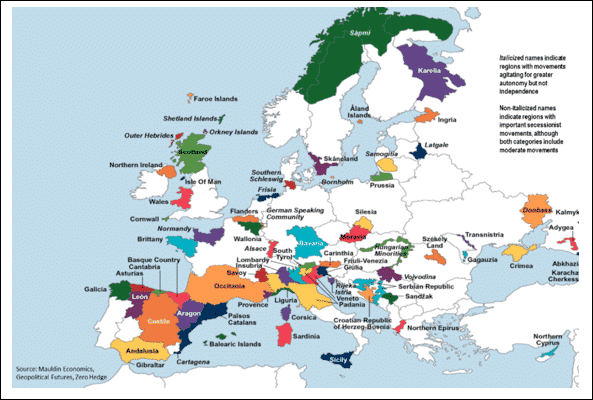 The real areas of concern, for me are found in Italy…

… and then rather shockingly, within Europe’s largest economy, Germany, where Bavaria with 15.16% of the German populous.

Anti-EU and German feeling has been growing in Bavaria as the state pays more than half of Germany’s inter-state fiscal adjustment and reportedly shells out more than €16 Billion a year to the Federal Government and other states.

According to a survey by the Hanns-Seidel foundation, 40% of Bavarians wanted independence from the Federal State back in 2011; since then the figure has grown to 46%.

Let’s not pussyfoot about the issue, Catalonia has the potential to be the spark that will tear a new hole in the fabric of the Eurozone and certainly derail the grand vision of ever more EU integration that is the dream of Jean-Claude Juncker, President of the European Commission.

Thursday of last week saw the level of EURUSD fall by 1.38% and by another 0.34% on Friday. It is not surprising that the short-term technical picture suggests the Euro can recoup some of the lost ground, however, it may prove to be a dead cat bounce as looking further ahead, more weakness is to be expected.

Markets may enter a relatively quiet phase in the next few days, however, if they sense the odour of a political crisis turning into an economic crisis and one not just restricted to Spain then a dive toward 1.10 and then parity in 2018 cannot be ignored.

Catalonia is in itself a big economy, its GDP is €223 Billion a year. It is a larger economy than Portugal. Be under no illusion, this scenario is worse than Brexit for as the desperate attempt to keep Greece in the Eurozone showed, there is absolutely no rulebook for a country leaving the Eurozone.

If Catalonia catalyses a spark that ignites an independence incendiary across Europe, investors in the Euro had better duck and seek cover.