We had a positive start to the trading week in regards to equities. Major indices were boosted from the positive EU Economic Summit with firm gains on return from the Thanksgiving weekend and with a boost for retailers from Black Friday and Cyber Monday sales.

Brexit was on the agenda at the beginning of the week. UK PM May was in Brussels over the weekend for the EU Economic Summit which is now known as the Brexit Summit. The leaders of the remaining 27 member states took less than 40 minutes to approve the PM May’s deal. This came after Spain struck an agreement with the UK and EU where Spain will have a veto over any agreement concerning Gibraltar.

During the week PM May headed a meeting with her Cabinet and warned members who are considering to reject her deal that this will open the door to more division and uncertainty. PM May will put the proposal through to the House of Commons for a vote on the 11th of December. Prior to this there will be a number of debates taking place from the 4th of December. It is already clear she faces a tough battle to get this through Parliament and has backed down regarding attempts to stop lawmakers from making changes to her Brexit plan. MPs will be able to vote on potential changes to her plans. 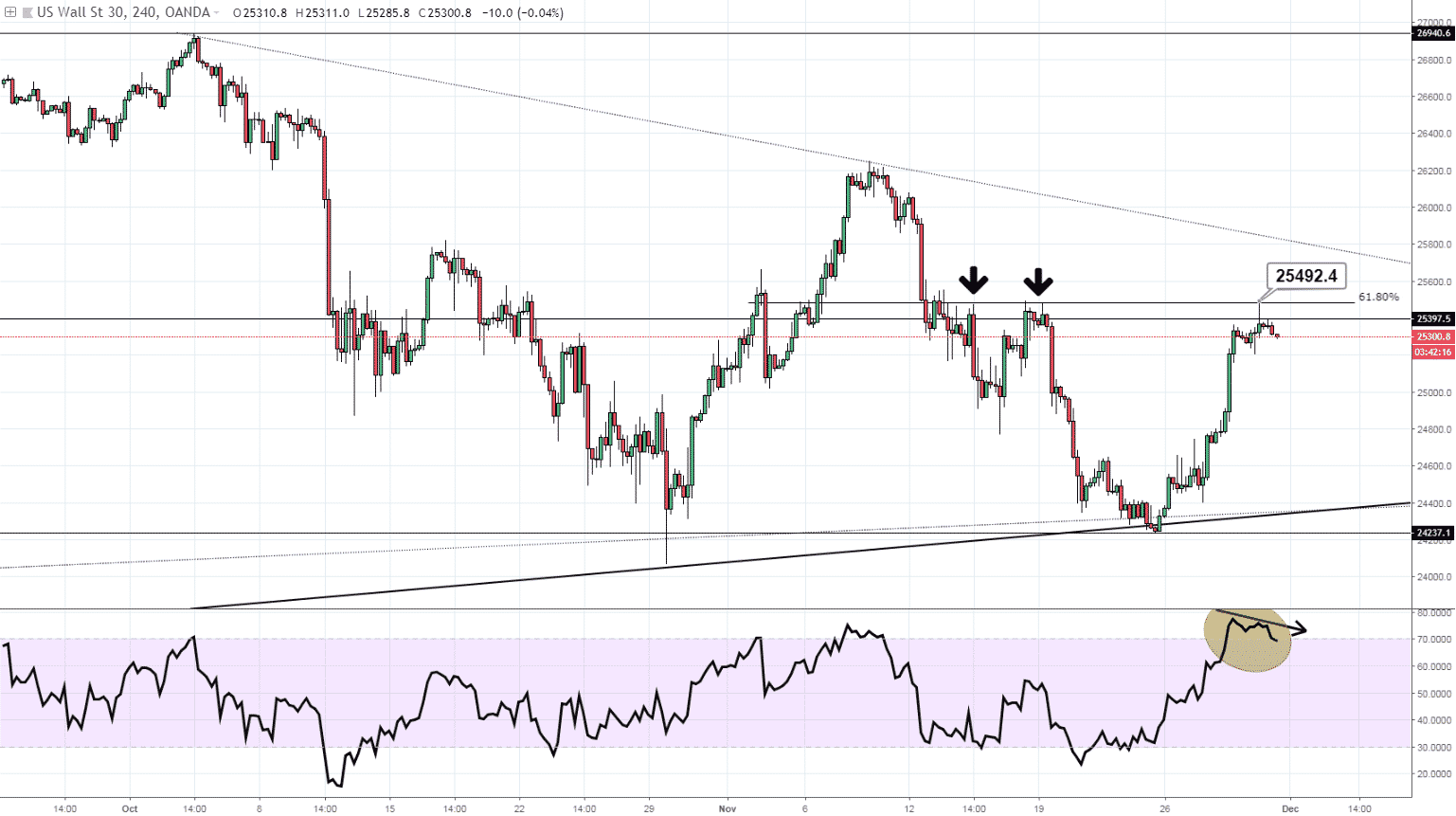 Mid-week the markets were led by Heads of Central Banks, the focus was on the head of Federal Reserve, Jerome Powell and the head of Bank of England, Mark Carney.

The largest move came from the head of Federal Reserve, Jerome Powell who surprised investors by saying that interest rates are just below neutral levels. If we compare this to his speech in October where he said they are a long way from neutral, we are starting to see a more dovish FED leading up to the final rate decision this year in early December. Do note, Powell stated at the beginning of this year that we could see four rate hikes this year, with three hikes taken place already. Market participants had speculated a fourth rate hike in December was probably and had been discounted in price. With the latest comments from the FED chair, the probability of a rate rise is less likely and traders have adjusted their positions accordingly. Traders also rushed to cover their short positions as we saw the strongest rally in the equity markets. We saw the Euro and the Pound rally against the dollar but also high beta currencies such as Australian dollar and New Zealand dollar rallied against majors due to their carry trade benefits.

Head of Bank of England, Mark Carney published analysis of its worst case Brexit scenario. He stated the UK economy could contract and the GDP could fall by 8%. This could lead to a spike in unemployment and house prices could crash up to 30%. Even so, the analysis does indicate the current deal May had struck with the EU would be the least damaging outcome for the UK economy. In addition to this all seven banks and building societies have passed their 2018 stress test. 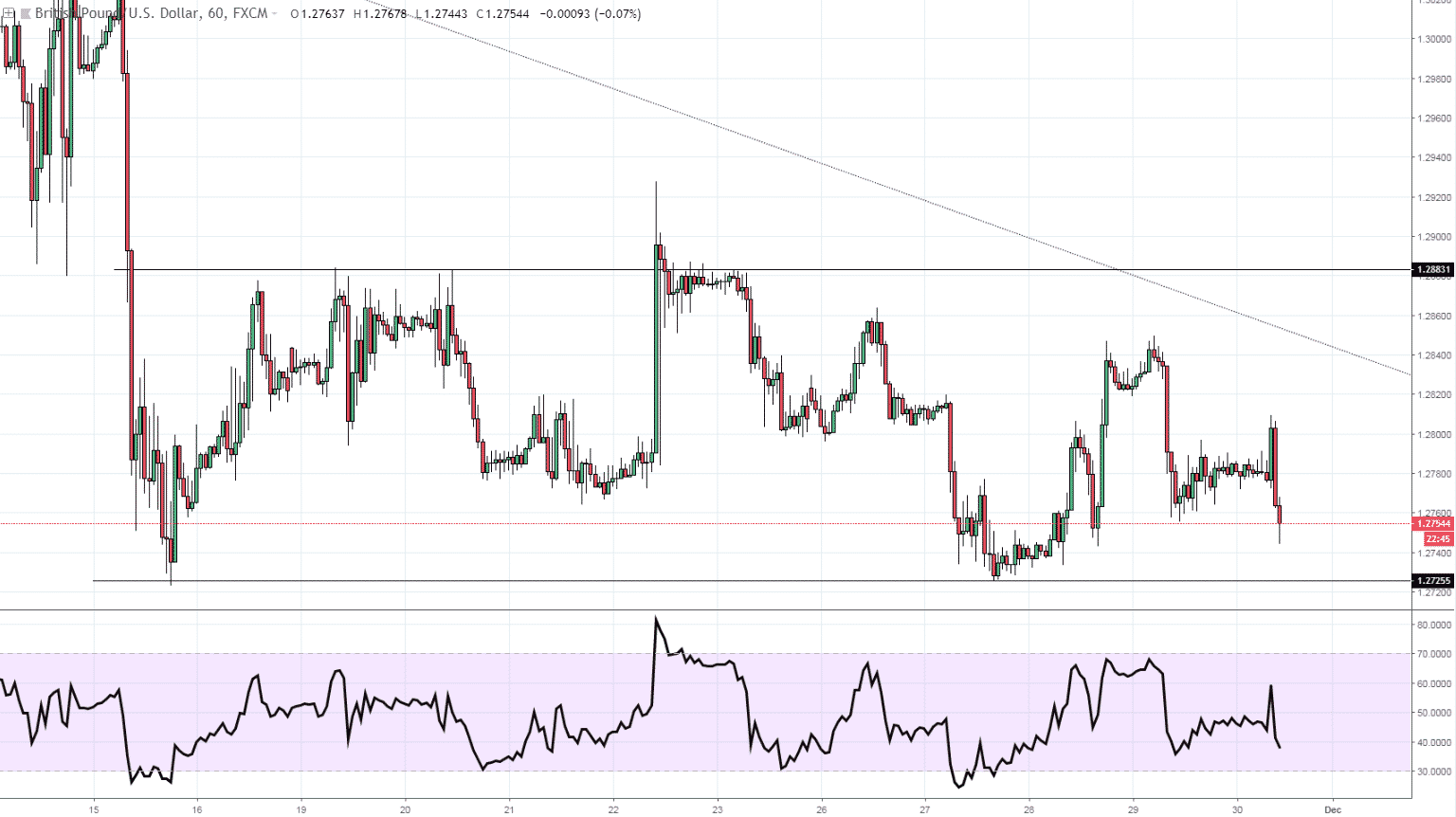 US30 4 hour, price action remains within a symmetrical triangle pattern. Recent price rally has reached a 61.8% Fibonacci retracement and overbought region on the relative strength index oscillator with divergence of the recent highs.

Trade wars is back on the agenda this week with a number of reports showing US President Trump’s intention to proceed with raising tariffs on China imports from 10% to 25%. We are seeing Trump’s hardball tactics causing a concern for the markets. As we come to the end of the week the session has started with a shaky beginning as uncertainty regarding US and China trade relations leading into the G20 meeting. It is clear US President Trump will consider to increase trade tariffs from 10% to 25%. The White House has stated Trump is open to a deal but if there is no constructive talks at the G20 meeting with China, this could lead to a hike in tariffs. We are expecting a volatile end to the week. 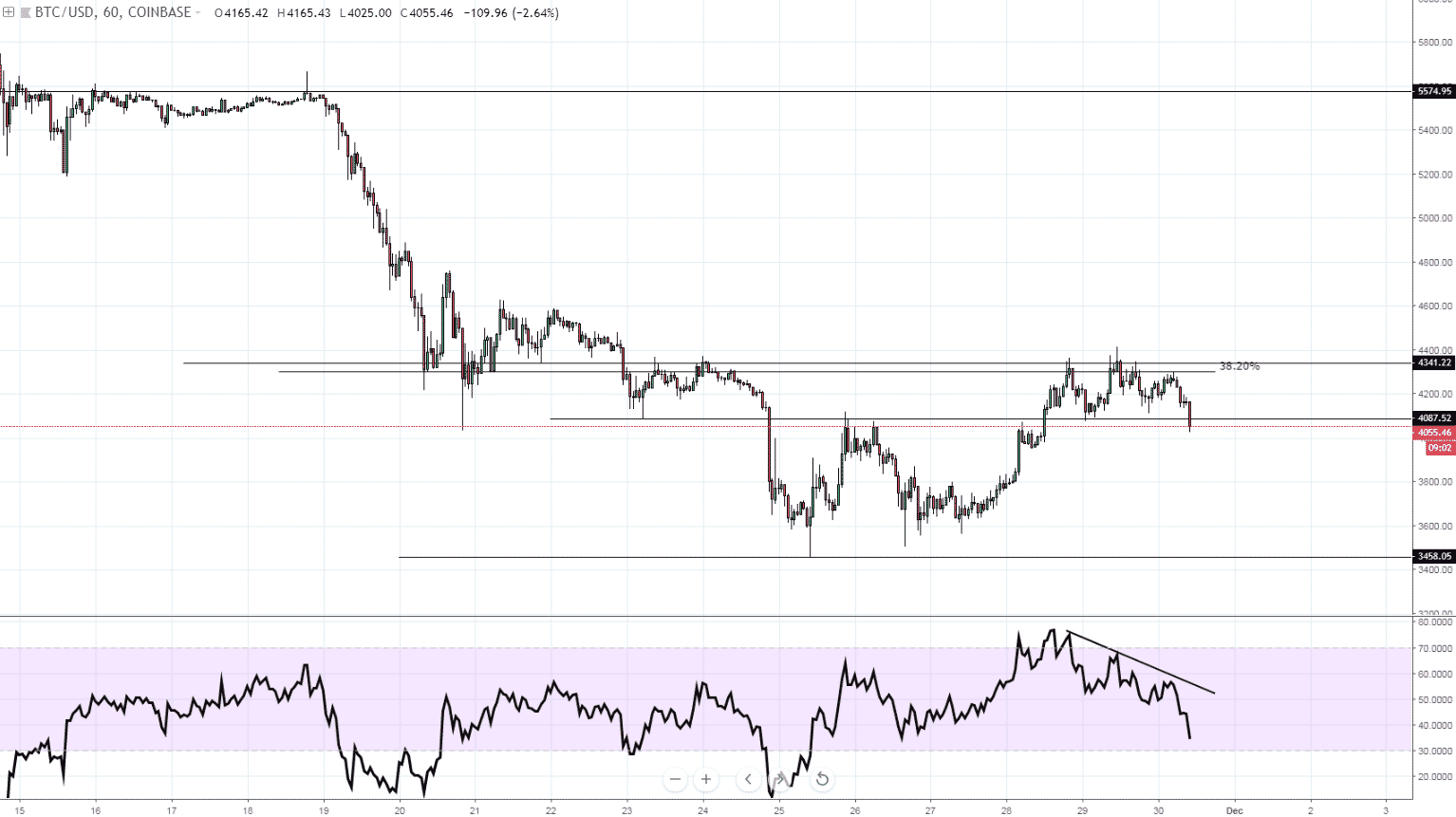 BTCUSD 1 hour, a correction back to the 38.2% Fibonacci retracement level from this year’s low. The momentum is still bearish as the relative strength index oscillator breaks through the 50 handle.

Overall traders have focused on the geopolitical themes such as Brexit, US – China trade relations and the Italian budget this week. Reports of Italy considering to curb its fiscal deficit target has led to a boost with the Italian FTSE MIB and has eased concerns in the EU. The Cryptocurrency market had a week to forget after the crypto sell off intensified further with BTCUSD setting a new low in the region of $3500.

The weekend focus will be on reports from the G20 meeting especially in regards to the meeting between the US and China.

Have a good weekend.

Gavin has over five years’ experience in providing market analysis and employs a combination of fundamental and technical analysis. He has been working at the London Academy of Trading as a senio...continued