The week just passed was looking bad for Donald Trump’s administration. A genuine “Black Cloud” hung over the White House.

This is an inquiry into potential collusion between President Trump’s election campaign of 2016 and Russians who interfered in the election to be the 45th President. It is not an overstatement to say that this investigation puts the survival of the Trump Presidency in danger.

All this was on top of reports; denied by the White House that the President was ready to remove Secretary of State, Rex Tillerson from office and replace him with CIA Director Mike Pompeo. In turn, Pompeo would be replaced by Republican Senator Tom Cotton of Arkansas.

Were such a scenario to pan out it would mean that is under 12-months the Trump White House will have replaced the White House chief of staff, press secretary, communications director, top security aide and a top diplomat.

Therefore, Trump needed a win as across the nation public opinion has turned against the President and the Republican Party. In a Gallup tracking poll taken on Friday, December 1st, a mere 34% registered approval of President Trump’s performance. He is the least popular first-year president in polling history.

As these debilitating effects were troubling Trump, so Senate Republican leaders were working the votes to pass the Presidents tax-cut bill. This even though many leading economists had suggested the programme will do little to drive economic growth and will add an additional $1 Trillion to the national debt, (see chart below), Government Debt in the United States increased to $20442474 Million in October 2017, a record high, from $20244900 Million in September of 2017.

The reason to push to vote through this week was seen in the special election in Alabama to be held on December 12th. Losing that vote would shrink the Republican majority from 52 to 51 and so place the tax bill’s final passage in doubt. Of course, another unsavoury factor is that the Republican candidate has been accused of sexually assaulting a child. So even a victory could have longer-term political implications for party popularity. 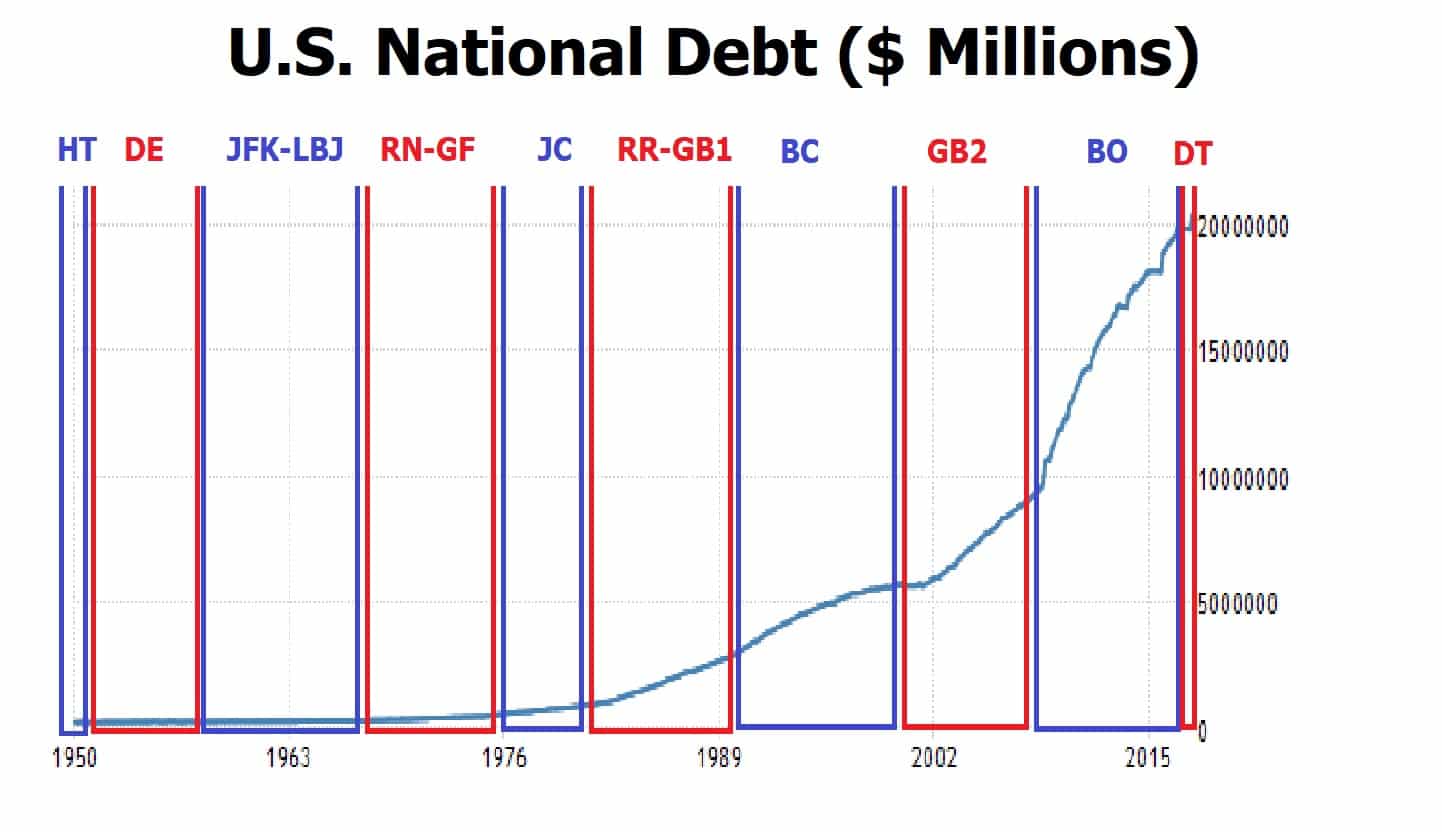 Source: U.S. Department of the Treasury

There was also an eye on the mid-term elections on November 6th, 2018. Given the party’s failure to overturn health care the worry for Republicans was that failure to cut taxes may well have seen campaign contributions dry up so helping the Democrats win back Congress next year.

Finally, the tax reform programme, or more correctly “Tax Cuts and Jobs Act “was passed by 51 votes to 49, following several amendments in a long, drawn out session.

This action when added to the fact that on November 16, 2017, the U.S. House of Representatives passed its version of the plan means that is essence the Trump administration’s plan presented on September 27th, 2017 can go forward.

The Senate plan cuts the corporate tax rate from 35% to 20% in 2019. The House plan does so in 2018. Both plans cut income tax rates, double the standard deduction, and eliminate personal exemptions.

Below is a summary of how both tax plans change income taxes, deductions for child and elder care, and business taxes. The Trump administration believes the final bill will look more like the Senate plan. 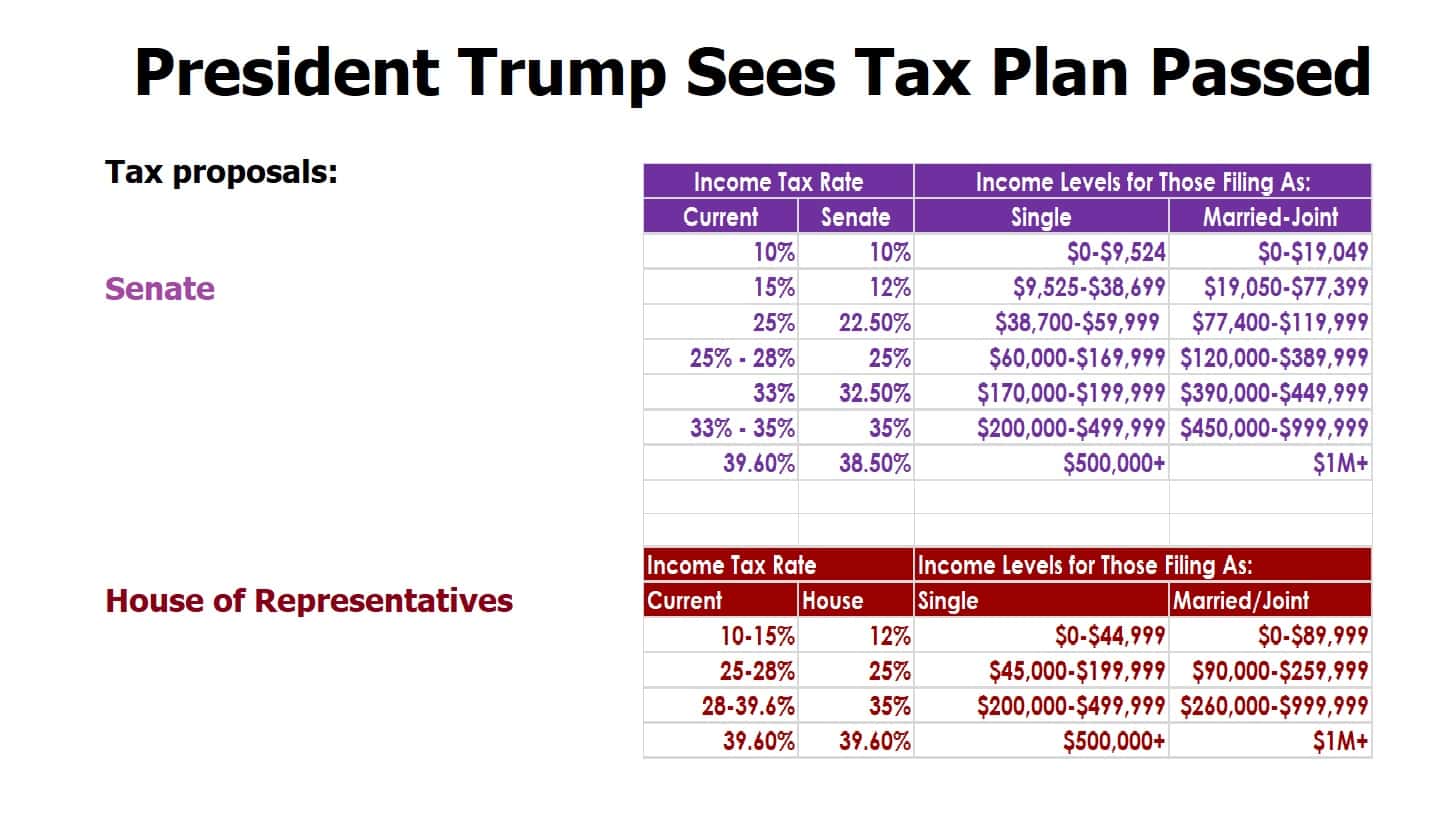 The Senate plan keeps the current seven income tax brackets but lowers several tax rates.  These rates will revert to the current rate in 2025.

The plan sees a sharp cut in corporation tax; this will be permanently lowered from 35% to 20%, while future foreign profits of US-based firms would be mainly exempt from tax; but a Senate committee finding has warned it would add $1 Trillion to the budget deficit.

Being in a hurry, the President wants the measures enacted by the end of the year and he congratulated Republicans for taking the U.S. “…one step closer to delivering massive tax cuts for working families…”.

The Senate will now merge its legislation with that passed last month by the House of Representatives, before it can be signed into law by the President.

This is a win for the President and is his first success in steering a major legislative proposal through DC. The Senate had blocked healthcare reform and so if the Republican controlled chamber were to back their President it is no surprise that it was around the area of tax.

The measures were passed despite the non-partisan Senate Joint Committee on Taxation warning on Thursday that the bill would add significantly to the federal deficit over a decade. They went as far as to contradict a White House claim that economic growth would compensate for the tax cuts.

Americans across all income levels would see modest tax breaks until 2026 and the committee said after that families earning under $75,000 a year would likely face higher taxes.

After the vote, Senate Democratic leader Chuck Schumer said the Republicans would pay the price at the ballot box in mid-term elections next year. He warned:

“…My Republican friends will ultimately pay consequences for this bill in 2018 and beyond. The Republican party will never again be the party of tax cuts for middle-class people, …”

He said the measures would endanger social security and medical provision.

Independent Senator Bernie Sanders was among the most vocal critics, declaring during the debate that the American treasury was “…being looted…”.

But Republican Senate majority leader Mitch McConnell, who succeeded in bringing dissenting party members into line, said the legislation would prove to be:

“…just what the country needs to get growing again… Everybody had plenty of opportunity to see the measure. You complain about process when you’re losing and that’s what you heard on the floor tonight. …”

The equity markets in the U.S. reacted favourably on Thursday when the rumour broke that the deal would pass, gains in the Dow Jones Industrials, S&P 500 and NASDAQ were 1.39%, 0/82% and 0.73% respectively. Of, course, the market took some froth off these levels of Friday as they fell 0.17%, 0.20% and 0.38% respectively…typically buy on the rumour and sell on the fact.

I applaud the reduction in corporation tax, as let us never forget that lasting economic growth comes from enterprise, not government directives. However, it will remain to be seen if tax cuts that empower the already, highly wealthy will simply lead to a squeeze on the middle classes once again. If so, the Democrats may yet have a good chance of beating President Trump in 2020…if only they can find a fresh, appealing candidate.